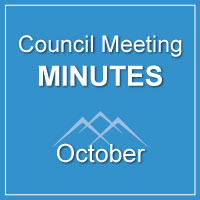 (Eric) The Shore Lodge is a great venue. The state representatives could focus more on local issues. Liked the master of ceremonies/facilitator.

(Sherry) We need to do a better job of selling ourselves at the event.

(Julie Good) The first of the month is a bad time – she has to do books. Should market to non-profits. The networking was great.

(Julie Crosby) The lunch time was short – end of line people did not have enough time. Need name tags with more information.

(Cynda) Recap WCMEDC activities for year. Disperse participants so not all people are sitting with their co-workers for better networking.

o ADV biking update: PR plan approval of up to $500 for Aaron Thiesen visit (ITC reimbursed). Approval for up to $500.

o Northlake Sewer upgrade update–GEM grant, RDBG, CEDA. Andrew updated on the potential for a CEDA grant for the necessary improvements to allow septage haulers to dump year round.